NEW - As of Summer 2018 the reference data is available to everyone and we stopped evaluating the submissions by participants. When you request the data (see below) you will receive an ftp download link to all the data, includig reference 2D oulines and 3D planes.

The automated extraction of urban objects from data acquired by airborne sensors has been an important topic of research in photogrammetry for at least two decades. One observation that can be made is that most of the papers dealing with urban object extraction focus on a single object class, e.g. buildings, roads or, less frequently, trees. Typically, results are published for a few test sites available to the authors.

The aim of this project is to provide state-of-the-art data sets which can be used by interested researchers in order to test own methods and algorithms on urban object classification and building reconstruction.

Evaluation results are made available online.

The evaluation results may be used by the participants for any scientific publication, however, note that we do not perform the evaluation anymore.

Detailled information about the test and the datasets is available from a pdf file which can be downloaded here. In the following a brief overview is provided.

If you are interested in participation and want to download the data, please fill in the questionnaire. After filling in the form you will immediately be provided with instructions on how to access the datasets.

Two test sites, each containing several test areas for which reference data are available, are provided for the participants in this project in order to evaluate techniques for the extraction of various urban object classes:

This test data set was captured over Vaihingen in Germany. The data set is a subset of the data used for the test of digital aerial cameras carried out by the German Association of Photogrammetry and Remote Sensing (DGPF). It consists of three test areas for which reference data for various object classes are available (yellow areas in the figure below) and a larger test site “Roads” for road extraction (blue area in the same figure):

For each of these test areas, the following data are distributed:

This data set covers an area of about 1.45 km2 in the central area of the City of Toronto in Canada which was captured by the Microsoft Vexcel’s UltraCam-D (UCD) camera and the Optech’s airborne laserscanner (ALTM-ORION M). The images have a ground resolution of 15 cm, while the laserscanner provided 6 points/m2. The “Downtown Toronto” data contains representative scene characteristics of modern mega city in the North America including a mixture of low- and high-story buildings with a wide variety of rooftop structures and street and road features. The test data can be divided into three test sites, 'Area 4’, ‘Area 5’, and ‘Entire Area’. The areas ‘Area 4’ and ‘Area 5’ should be used for testing object extraction and building reconstruction techniques, while the entire test area can be used for road detection.

Both datasets are subject to different conditions of use which are detailed in the document. You will need to agree to those conditions. 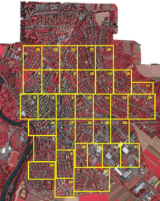